When I wrote my post about getting started live streaming, I wanted to share my Stream Deck setup as well, but I figured it was a bit more appropriate in its own post. So, let's take a look at this little device that powers so much of my streaming. 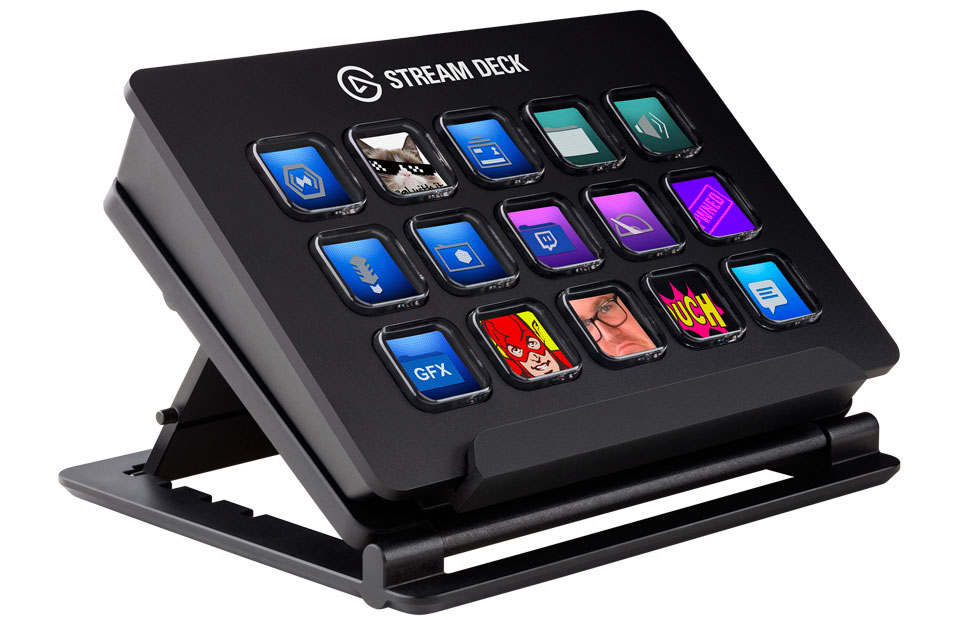 What is the Stream Deck?

The Stream Deck is a class of hardware device created by Elgato. There are three sizes, and each is essentially a mini keyboard where each key can be customized to show any icon you want and take any of a series of actions when pressed.

The actions you can take are primarily targeted at streamers, so many integrations work with streaming tools like OBS and control mics and screens. But there are also some other broadly useful integrations, like media controls, social media push, and more.

The simplest and most common uses for Stream Decks are toggling mics, switching scenes in OBS, playing sounds, and triggering actions in other tools like Twitter.

If you want to get a bit fancier with Stream Deck, though, you can also organize your actions into "profiles" (sort of the different pages of apps in the iOS home screen), or create "multi-actions", which trigger more than one action when you press a single key.

There are three sizes of Stream Deck, but the standard 16-key is the only one you can find easily on Amazon. Here are links to all three, if you're interested:

I personally have the standard and I think it's a fantastic size. There are enough options that I don't have to swap between folders during any given scenario, but it's not massive like the XL.

In order to customize your Stream Deck, you'll install an app on your computer that lets you create profiles and assign actions to keys. 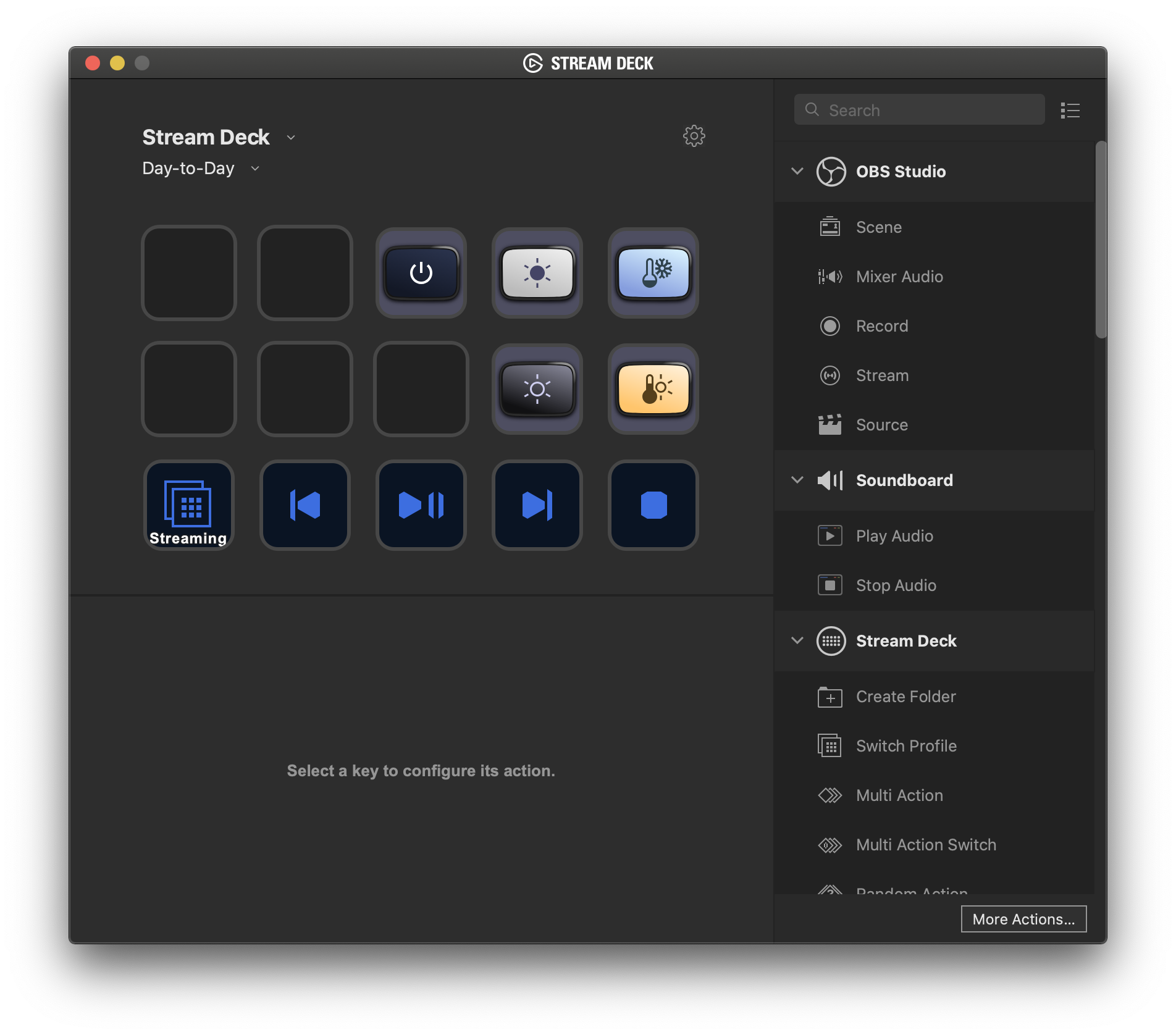 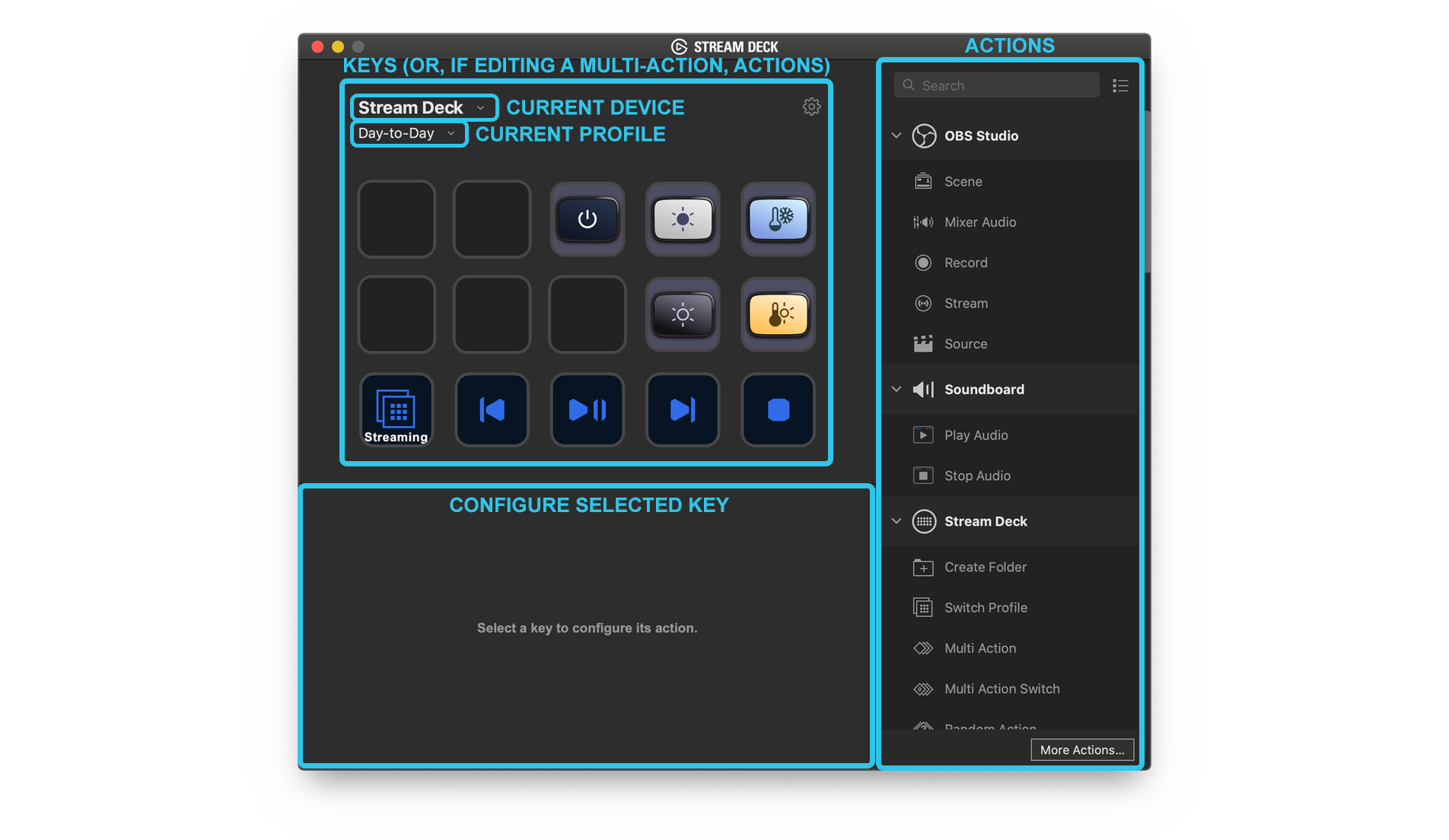 There are a few important concepts when it comes to Stream Decks:

There aren't many global settings of any significance on the Stream Deck, so I'm more interested in sharing my profiles and multi-actions with you.

As you can see, I'm using a combination of profiles (which I use sort of like scenes—one for day to day, one to prep for a stream, one during solo streams, one during guest streams) and multi-actions (to combine multiple steps that always happen at the same time together). 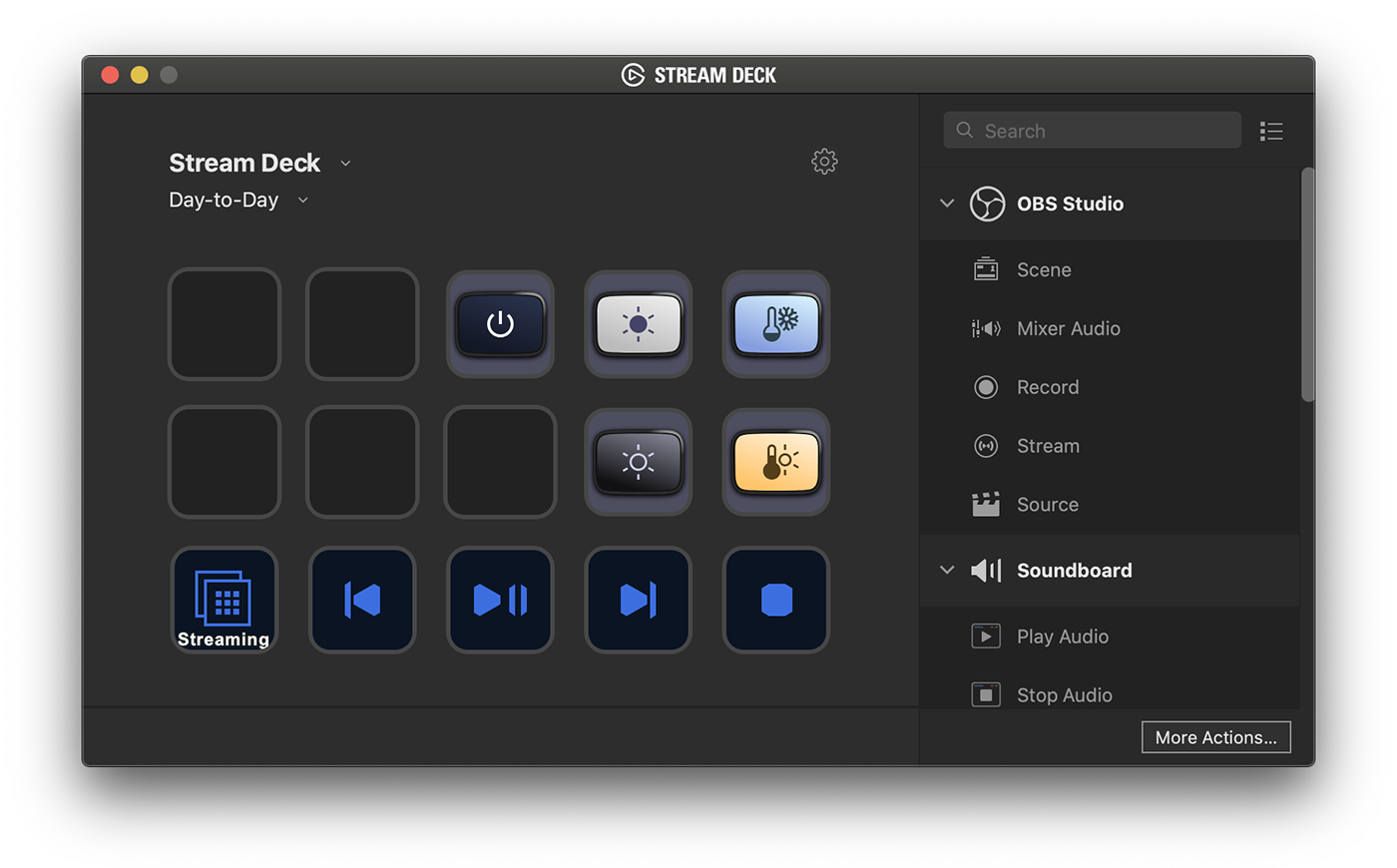 Day to day actions: The actions I might use when I'm not streaming: controlling lights and music. 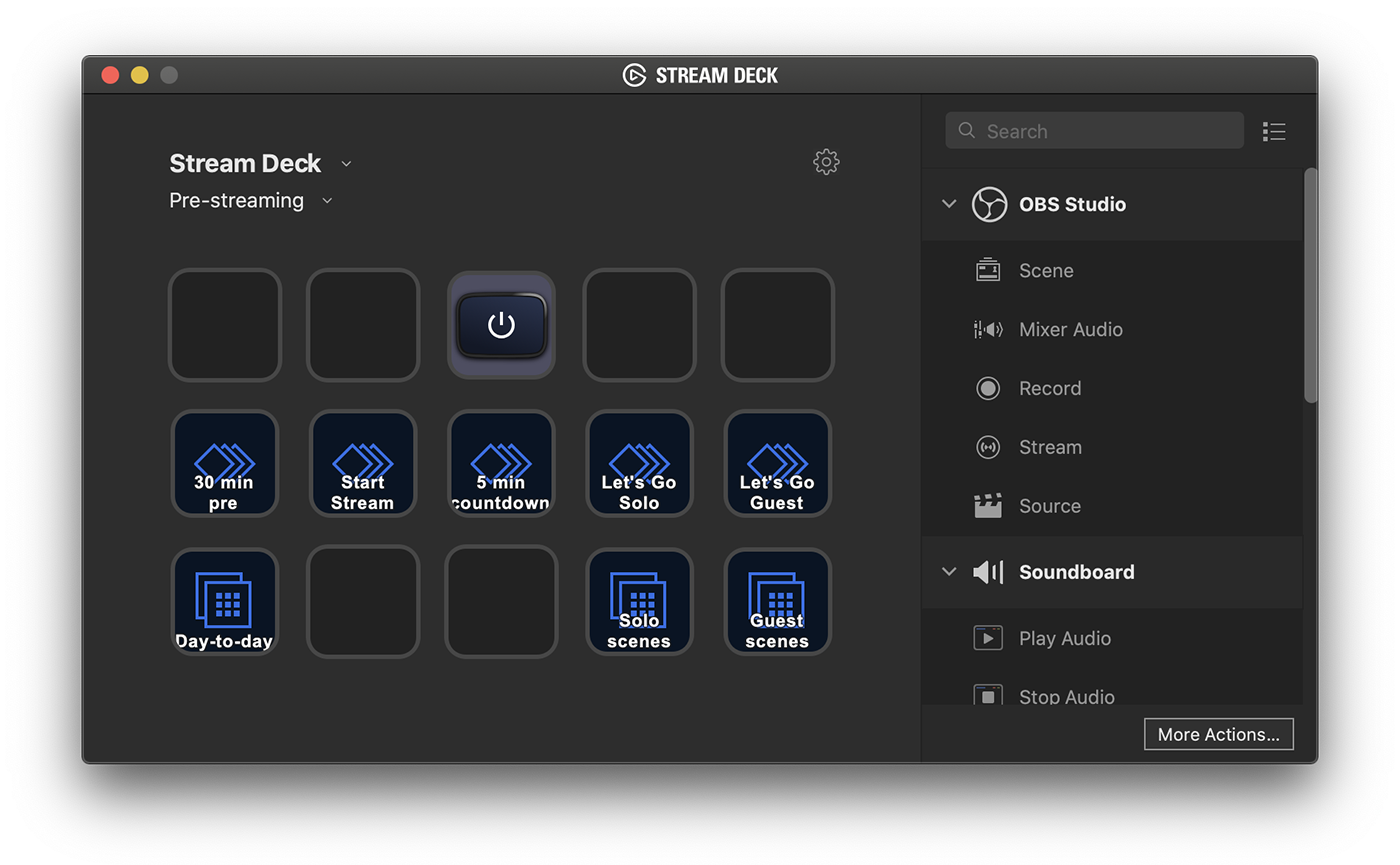 Pre-streaming actions: The actions I take as I prepare for my streaming session. I work through these multi-actions one by one as the stream gets closer until I finally hit the guest or solo start buttons. 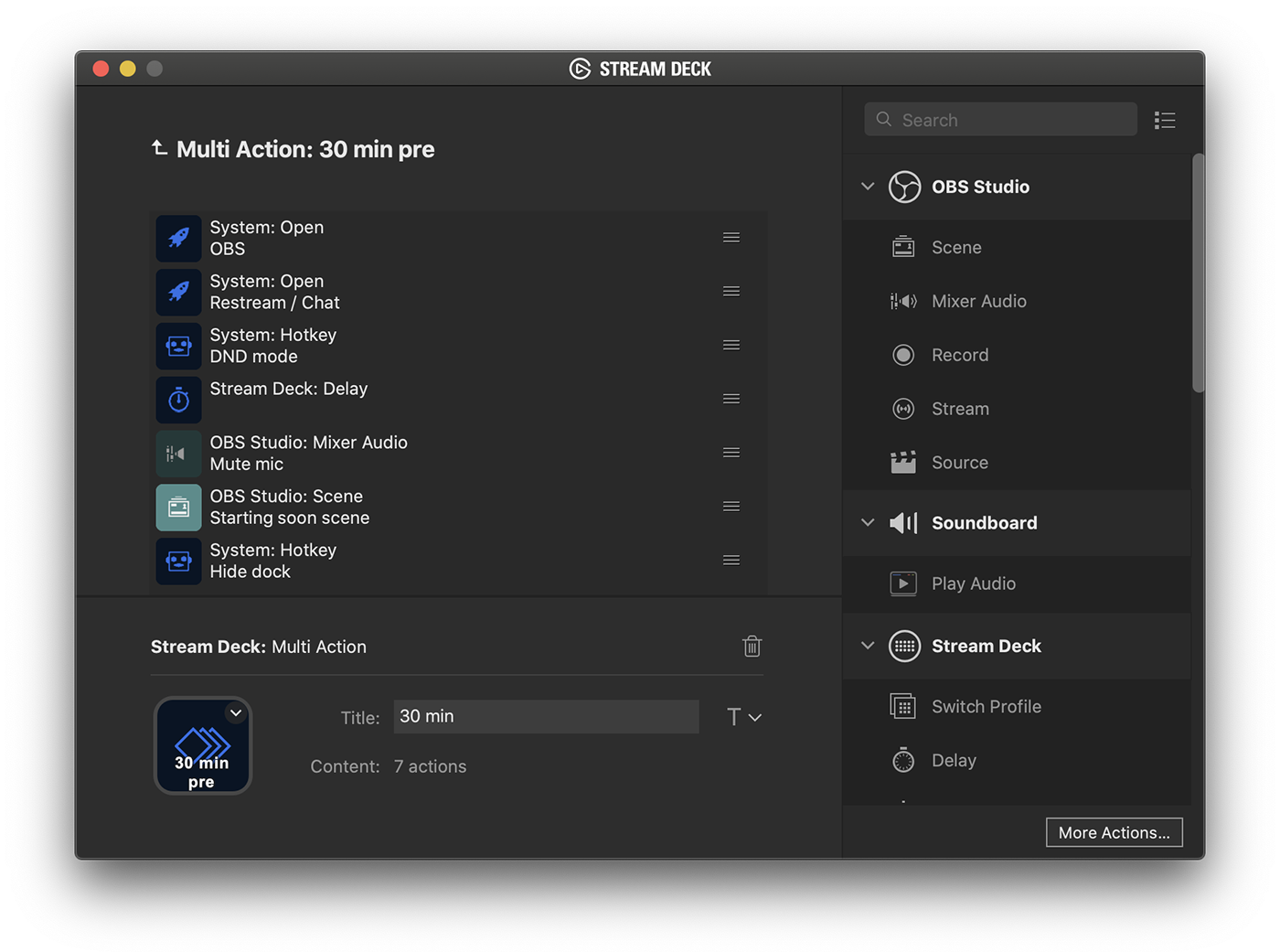 30 minutes before stream multi-action: This is the multi-action that I press as I'm readying my computer for streaming. I still have to take a few steps manually, but this handles some of the most repetitive aspects of my prep process.

Start stream multi-action: This button actually starts the stream. I hit this about ten minutes before the stream is scheduled to start, so the folks who get notifications when a stream starts can get the notice, and so I can take a few minutes to make sure my stream is set up correctly. When there are only five minutes remaining, I hit the "5 min countdown" button to start the timer. 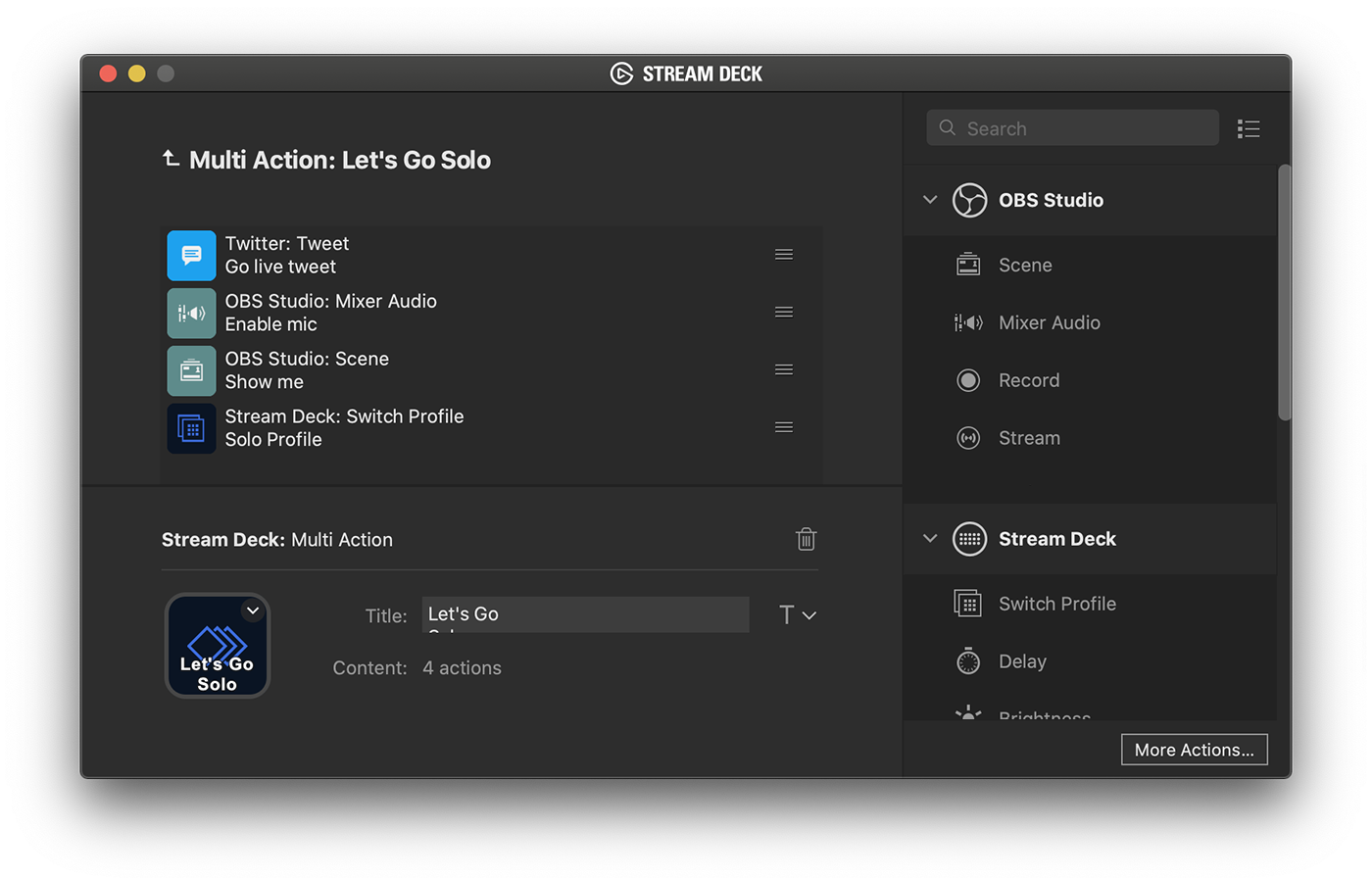 Let's go solo multi-action: This, and its guest alternative, I will press the moment my start time arrives. Pressing this means the stream has really started, and I am now on camera. 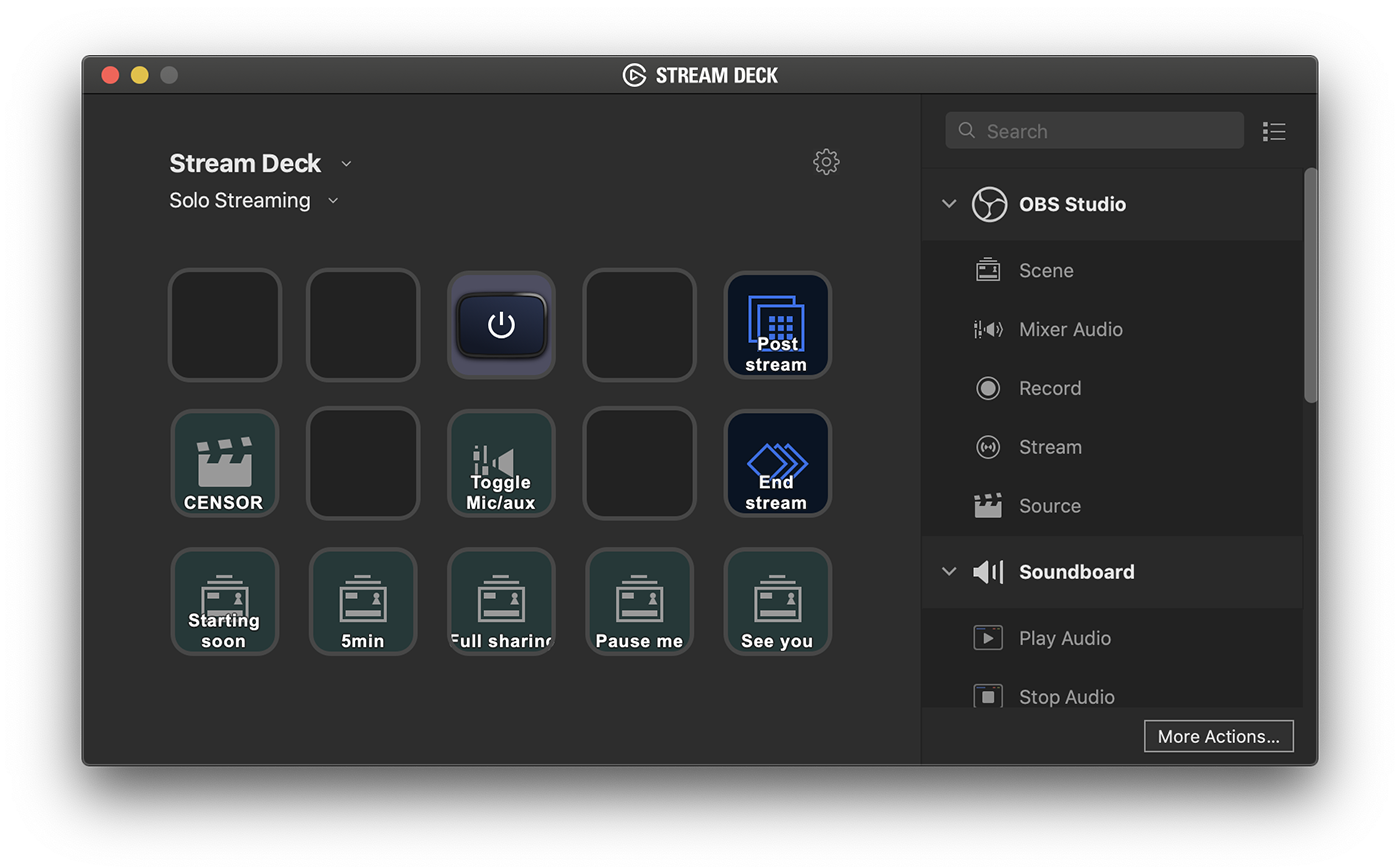 Solo streaming folder: This, and its guest alternative, are the profiles I stay on during the stream. I can switch scenes, censor the primary screen, and toggle my mic and lights.

I've used only the default icon sets in Stream Deck, but I have a goal to eventually get more customized icons. You can download existing icon sets into Stream Deck or make your own.

You can learn more by taking a look at Elgato's intro video on creating your own custom key icons.

That's it! The Stream Deck is a really fun tool, and it makes it a lot easier to standardize my streaming process. The form factor is perfect, being able to customize the display of the keys is a delight, and it's just an all-around great product.

How to get started live streaming on Twitch and YouTube

Setting Up Your Webcam, Lights, and Audio for Remote Work, Podcasting, Videos, and Streaming