Once the videos are released I'll be able to update this post with more info, since I was on an audio-only stream for the majority of this.

I'll be writing my usual longer, in-depth blog posts about each of the new 5.3 features that are releasing during Taylor's Laracon talk today, but I wanted to find a single place to write down my notes about the new features that Taylor is announcing for the first time today, so I figured, why not put it in a single blog post here?

This is just my notes from the live stream. I'll update this later with more info, and then will write full-length posts; this will just be casual notes.

Search/ElasticSearch driver; packaged separately like Cashier. Works best with Algolia but would love community support for other drivers.

Model is going to have a Searchable trait.

Indexes the toArray() function on the model and puts it up in the search index.

Add ScoutServiceProvider to config/app and Searchable trait to your model.

The trait hooks into Eloquent events. Listens to those events and updates your indexes in response.

Closure that allows you to override indexing:

... then later update all of those:

Also could do: this on a relationship

It's smart enough to be like "upsert"; it updates any that are already there, and inserts any new ones.

Can also remove from search:

These interactions feel slow—makes sense; these are HTTP requests going out!

So: in config/scout.php set queue to true so that these updates are set to be synced async.

It can't do the full range of SQL where clauses, but it handles the basics.

DeploymentCompleted is a PHP class; it represents an email.

Any public properties on the mailable object are accessible in the view, so you don't have to explicitly pass any data.

All the same methods you have within your mail closure like attach.

Limited features. No file attachments, CCs, etc. This is not email.

Password reminder in 5.3 will use this out of the box.

Mail driver comes with a slick default template, responsive, etc. but you can also export/publish it into your app and customize it yourself.

Some drivers know how to differntiate states; some don't. For example, the error state in the mail driver will get a big red button instead of a big blue button. The success() state gets a green button.

New settings in config/app.php: name and logo for notifications.

Table that holds these notifications. Polymorphic; columns for notifiable type, id, level, intro, outro, action text, action url, has been read or not. Laravel doesn't know how to check whether it's read or not, you handle that.

Just add 'database' to the via() method and all of a sudden it's getting it; your calling code doesn't know or care which via driver it's gonna use.

Add slack to the via() method. Some drivers require more info. Context:

routeNotificationForSlack() method on the User (or whatever else is notifiable).

Go to the notification class and add the ShouldQueue trait. Now they're all queued. Boom goes the dynamite.

Full OAuth2 Server implementation in Laravel in like 5 minutes!!!!!!!!!

In Laravel 5.2, we got A) the idea of multiple auth drivers and B) the token-based authentication. Token-based auth works, it's fine, but it's more important as the ground layer for this.

Steps to use it:

Passport exposes a JSON API for your frontend to consume to let you manage it.

Comes with Vue components by default to make it easy for you to manage them, if you want to use them. It's just a reference but you could use if you want.

Three default Vue components out of the box:

For these examples Taylor made an app at http://passport.dev/ that has Passport installed. This app is providing the OAuth API. Then another at http://example.dev/ that is a client, consuming it. 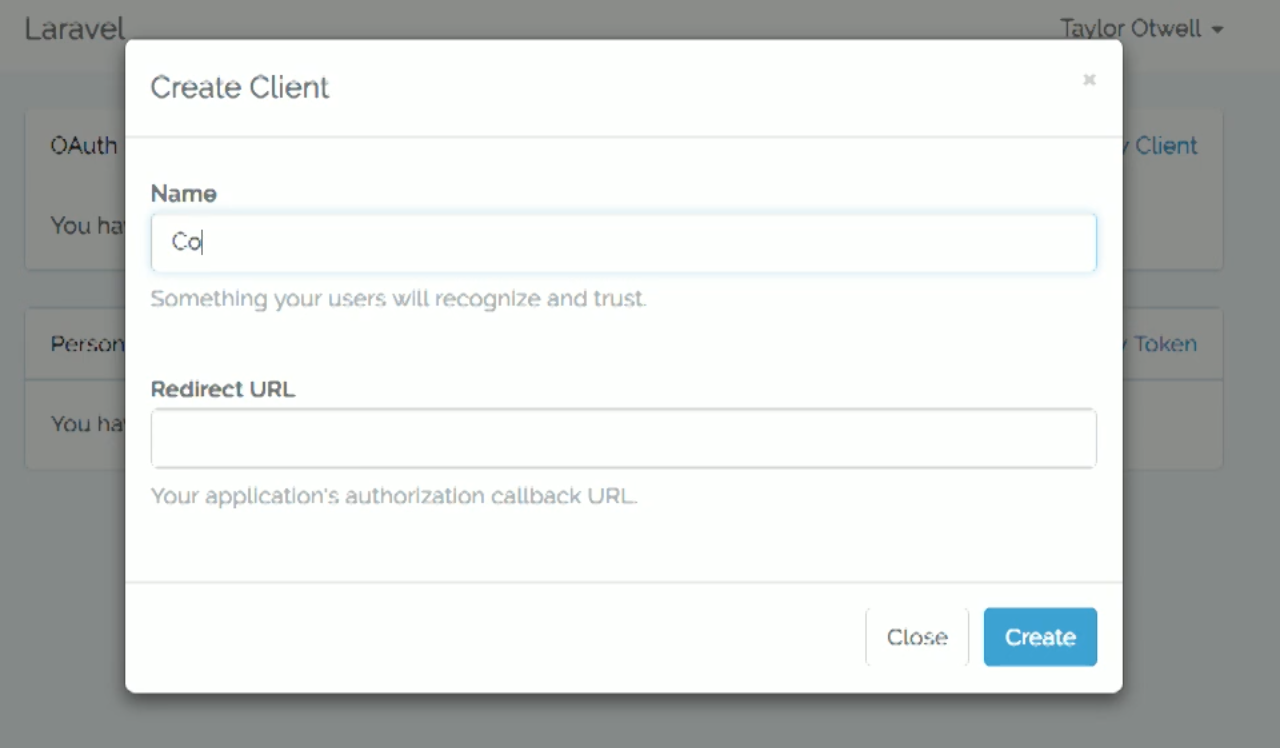 Once you create a client, you get a secret and a client ID. Go to your consuming client (another site, etc.) and put that key and ID in there.

Showed a sample app that CONSUMES this API (not that provides it); lives at http://consumer.dev/:

When you visit http://consumer.dev/ it tries to authenticate, sending you over the Passport site; you get this screen:

When you authorize, takes you back to http://consumer.dev/callback and you have access to your token now.

To prove, Taylor makes a route in his passport app that just returns the authenticated user, puts it in the routes/api.php routes file. Calls it from Postman, pastes the JWT token from above into the Authorization header and calls the page, and it just works. (Authorization: Bearer TOKENHERE)

Easy to revoke applications in the UI:

Keeps saying: "This is not what your UI needs to look like; it's just a free reference application."

New in Passport that League package doesn't have: Want it to be easy to create a token in the UI to just play around with the API. Since every token is associated with a client (last one we made was associated with http://consumer.dev), make a personal client: php artisan make passport:client --personal. Then you can go to the Personal Access Tokens component and hit "Create New Token". Creates them with your app (passport.dev) as the listed client.

Middlewares to limit users' route access based on your scopes. Add them (whatever they are) in the HTTP kernel. scope and scopes.

The scope middleware authenticates you for a single scope; scopes requires all defined scopes.

If you want to limit the user to only access a route if they have the conference scope:

If you have a frontend that's consuming the API, you may not want to do the whole OAuth dance. But you might want the OAuth flow to still be available for external API users.

Trick for your frontend--which has your user already authenticated via Laravel and sessions--to access your API and get around the OAuth flow.

Go to HTTP\Kernel and add new middleware to web:

This adds a JWT token as a cookie to anyone who's logged in. Uses "Synchronized token pattern" to embed the CSRF token into the JWT, and require a CSRF header if you sent that cookie, and they have to match. Some kinda magic.

Safe because other apps can't read your cookies so they can't get your CSRF token out of the JWT token. Boom. Can make API requests if logged in without worrying about OAuth tokens.

"My API doesn't have to be an after thought." Set the whole thing up in 15 minutes with demos.