A lot of folks in the PHP community have been checking out PHPStorm lately, including myself and most of the developers I work with. We love the code intelligence we get from PHPStorm, but still miss the speed, quick boot-up, and convenience of Sublime Text.

Before I blindly assume PHPStorm is the only way to go, I wanted to see: Can I bring the things a PHP-focused IDE provides PHP developers back to Sublime Text and get the best of both worlds?

Let's start with a quick list of ways that PHPStorm really sets itself apart for me. Please note: There are a million other features that PHPStorm uniquely offers, but to be honest, it's the tiny little conveniences that I've seen provide the biggest boost in efficiency.

Also note: This is Sublime Text 3 we're talking about.

My Must-Haves From PHPStorm

Without most of these wonderful PHP-focused features, it'll be hard to recommend using something other than PHPStorm, even if it's slower and costlier and uses more memory. So. Can we reproduce them in Sublime Text?

Before we talk about anything else, you at least need to know how to install packages in Sublime Text.

If you haven't yet, Go install Package Control now.

Unless otherwise specified, every package after this should be installed using Package Control.

The most significantly PHP-focused package for Sublime Text is called Sublime PHP Companion.

Like most packages, it contains a series of actions you can perform. ~~They're mapped to certain keys by default, but you can always re-map them.~~ Update: there is no keymapping by default anymore. Learn more about how to set up PHPCompanion keymapping here.

The package isn't perfect, and it is clearly not as bright as PHPStorm is when it comes to detecting namespaces and parsing some weird edge cases. But for day-to-day work, this is a huge boost in the PHP-code-knowledge area.

Sublime PHP Companion doesn't sniff your classes and give you autocompletion, sadly, but SublimeAllAutocomplete does register the names of all symbols (functions, classes, etc.) in any files you have open in other tabs and add those to the autocomplete register.

This isn't quite the same as full userland-code-sensitive autocompletion, but it helps a lot.

Sublime PHP Companion makes it easy to right click on functions and go to their definitions, but this shortcut brings back PHPStorm's CMD-click-to-definition. FYI, in Sublime Text CMD (or windows' ctrl key or whatever it is on other systems) is called "Super".

First, create a user mousemap file. If you don't have one, go here:

Next, place this in the file:

You just taught Sublime Text this: "when I hold ctrl and click button one, fire the goto_definition command." Done! (original source)

Note: I originally wanted to suggest using the super modifier, so it would be just like PHPStorm; however, that would override Sublime Text's "hold super and click to get multiple cursors" behavior, so I didn't.

You can tweak all sorts of settings, but you're primarily either going to run it every time you save your file (good, but can get annoying), or every time you trigger it from the command palette (press super-shift-p and then type until you get "PHP Code Sniffer: Sniff this file") or keyboard shortcut (ctrl-super-shift-s by default).

You'll get gutter highlights and a list up top of all of the places your code doesn't satisfy the linter.

Note that this and any other packages that rely on code sniffing and linting will be requiring command line applications installed, so be sure to visit their sites and read their directions.

Interestingly, there's a relatively un-noticed plugin doing the same thing (but for PHPCS only) that's written by the same group that wrote PHP CodeSniffer, so it might be worth checking out as well; it's called PHP_CodeSniffer Sublime Text 2/3 Plugin (creative, I know.)

I've never used this one, though, so proceed with caution.

Mike Francis also shared a custom build script he wrote that runs PHP-CS-Fixer on your code whenever you trigger it. That means it'll actually enforce PSR-2 (or whatever other PHP-CS-Fixer standard you pass it) on your code for you.

Taylor Otwell actually shared this same script with me, but he didn't write it up as nicely as Mike did. :) He did, however, mention that you might want to set this preference: "show_panel_on_build": false, This'll keep it from popping out the command panel with your results every time, which can get very irritating very quickly.

SublimeLinter PHP (and its required dependency, SublimeLinter) rely on PHP's built-in linter (just like the Sublime PHPCS plugin above). This is a simpler version that only runs the linter, nothing else.

DocBlockr makes it simple to create new doc blocks, but more importantly, if you create a doc block just above a defined function, it will extract that function's parameter information and pre-fill it in your doc block. Boom.

Are you the type that hates switching from your IDE to your terminal/Git client? Sublime Text Git provides access to many Git commands directly from the Sublime Text command palette.

GitGutter shows you diff information regarding each line's status--has it been modified, inserted, or deleted?

This is not nearly as powerful as PHPStorm's Git gutters, but it's a step in the right direction.

There's a great plugin that makes it super easy to run PHPUnit from the command palette or a keyboard shortcut: SimplePHPUnit

Just like the name implies, you install the package and you're up and running.

CodeIntel is supposed to provide Sublime Text intelligence about the language you're working in. It should provide autocompletion, easy jump-to-definition, and information about the function you're currently working in.

Why do I keep saying "should" and "supposed to"? Because I have yet to meet a PHP developer who can get CodeIntel up and running consistently and predictably. Have you? Hit me up.

When I asked around on Twitter, plenty of folks shared plugins. Since I don't use these, I can only share them vaguely, but I'm sure they're all worth a quick check.

Do you miss the Xdebug integration in PHPStorm? Check out Codebug, a standalone xdebug client. 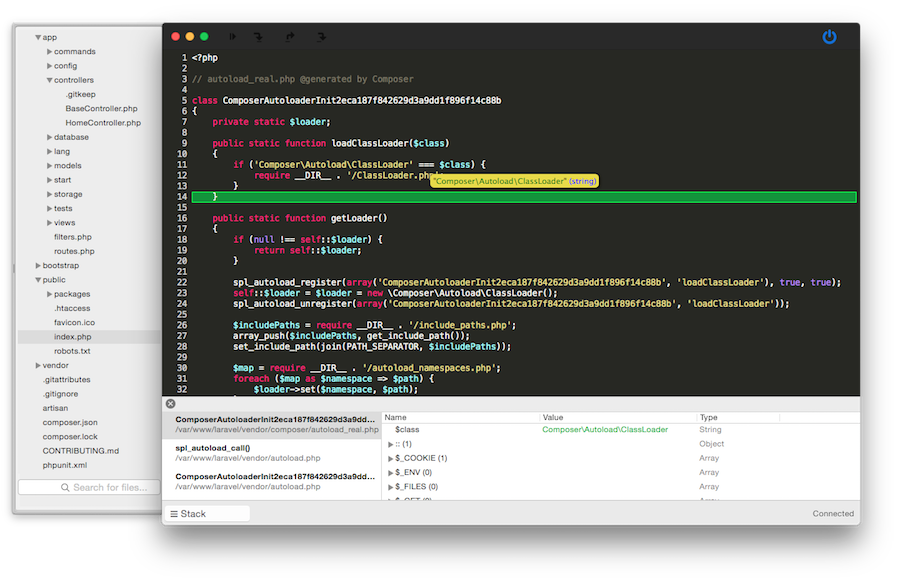 This post is not an introduction to all things Sublime Text, but I do want to cover a few important pieces here.

Finding files with "Goto Anything" (cmd-p)

If you press super-P you'll get the wildly powerful Goto Anything palette, which allows you to easily find files, but you can go a bit further: if you find your file (e.g. by typing Handler.php), you can also trigger opening it at a certain line (Handler.php:35) or at a certain symbol (Handler.php@report).

While the Goto Anything palette lets you search for files in your project, the Command Palette allows you to search for commands.

This means that any command that Sublime Text lets you perform (run builds, rename files, etc.), but also those from third-party packages (Sniff this file, etc.) can be run purely from the keyboard, even if you don't know (or have) the keyboard shortcut.

If you press super-R you'll get the Goto Symbol palette, which will navigate to any symbol in your current file.

Many editors have added multiple cursors, but Sublime Text still does it the best.

If you've never tried it, go learn about it somewhere, but here's a quick intro:

Open up a file. Hold "super" (cmd on Mac) and click several places around the file. Now start typing. BOOM.

Another great trick: Place your cursor on a common word (for example, a variable name). Now press Super-D a few times. You now have several instances of that variable selected and you can manipulate them all at once.

Or, select five lines and press Super-shift-l. Check it.

There's a lot more you can do with this if you get creative.

Did you know that when you're using any of the command palettes in Sublime Text, you don't have to finish one word?

There's a lot more to learn about how Sublime Text works, and a lot of tools and courses available to you. This is not a comprehensive resource for everything that's great about Sublime; those guides have already been written.

If you want to learn more about Sublime Text, there are two excellent resources I'd consider checking out.

Let's take a look at our list and see what we've handled:

What's my verdict? As always, it depends. I think it'll depend some on the project, some on the developer, and some on whether or not I can find solutions to some of the issues above. But I'm definitely leaning on Sublime Text a lot more than I was six months ago—it's just so darn fast.

Are there any Sublime Text tips for PHP developers that I missed? Let me know on Twitter.

Are there any PHPStorm features that I didn't cover here that you think are vital to every developer's toolkit? Let me know that too.

Also: I couldn't've written this without Adam Wathan, Taylor Otwell, Jeffrey Way, and many, many other friends on Twitter.